The Heritage Coffee House in Kolkata

You have visited Kolkata but did not try the special coffee of Indian Coffee House? Then, yes, you have missed the pre-independence heritage building. “Indian Coffee House” a famous cafe in Kolkata, the City of Joy and creativity. In 1994, The Supreme Court of India declared this cafe as a Cultural Center of India and a “Heritage” building.

This famous cafe is situated at the junction of Bankim Chatterjee Street and Baithakkana Road in College Street, near famous Presidency University. 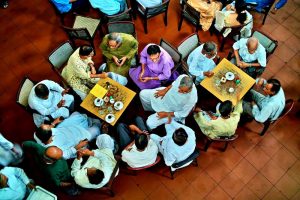 Coffee House was founded as Albert Hall (in honour of Prince Albert Victor of Wales) in 1876. In 1947, after the independence of India, the Central Government changed the name Albert Hall to the Indian Coffee House.

This cafe is known as a place for intellectuals. It has the distinctive of having been graced by Nobel Laureate Rabindranath Tagore, Netaji Subhash Chandra Bose, famous film director Satyajit Ray, Nobel Laureate Amarta Sen, actress and director Aparna Sen, film director Mrinal Sen and many famous personalities.

Since 1958, The Indian Coffee Board Worker’s Co-operative Society Ltd is managing the Coffee House.

If we look into the menu, the Indian Coffee House offers verities of snacks for both vegetarian and non-vegetarian customers. With a reasonable price, this cafe is maintaining its popularity till date.

Though this heritage cafe was renovated in 2009, the old nostalgic charm has not yet wiped out.

11 thoughts on “The Heritage Coffee House in Kolkata”

Powered by WordPress | Theme by TheBootstrapThemes