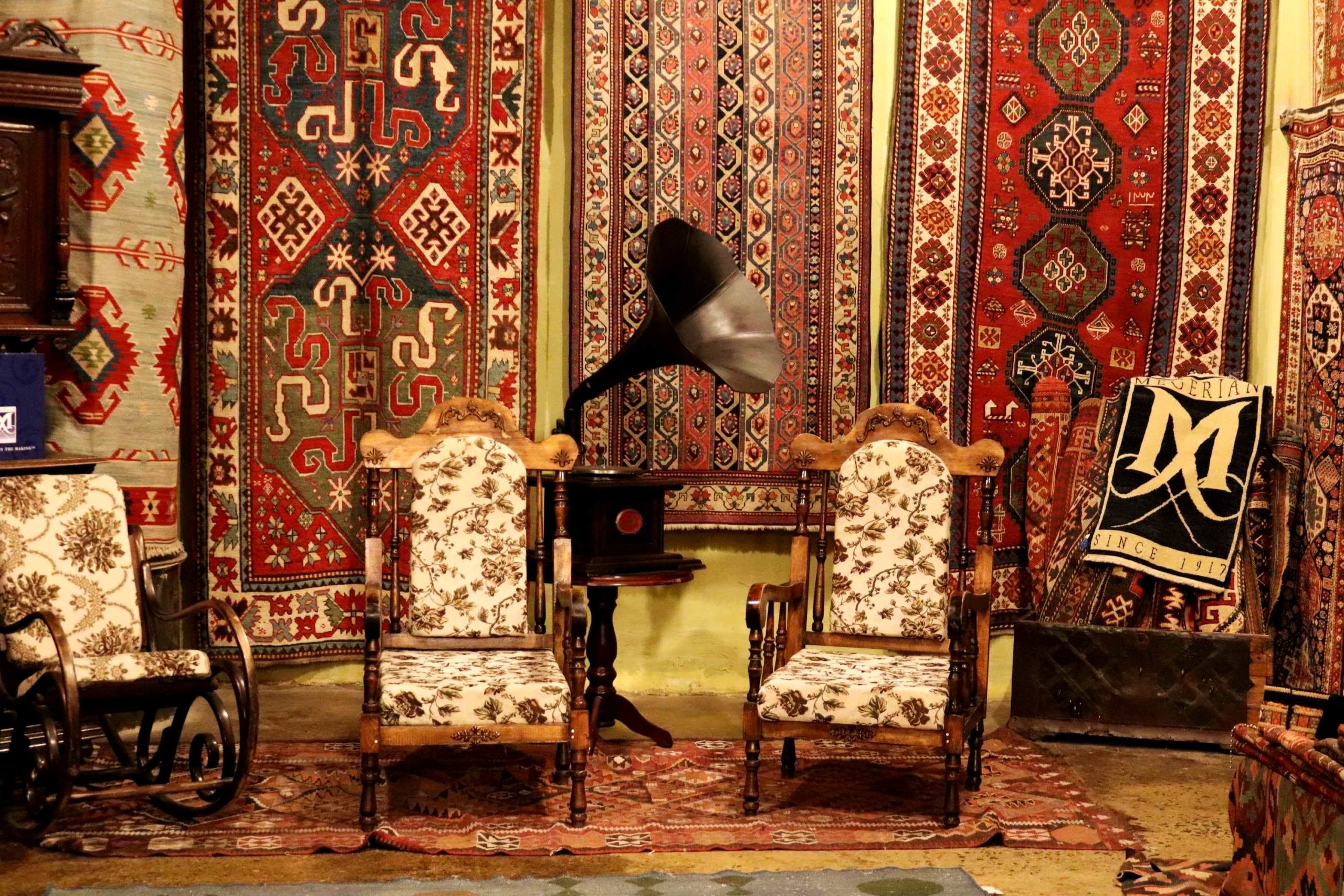 It was an amazing part of our Armenia trip. Before taking the flight back to UAE we decided to visit Megerian carpet company situated in Yerevan, the capital city of Armenia. This is a US company founded by Megerian family in 1917. This family was from Armenia and initially, the company was involved in cleaning and repairing the carpets and rugs. later, they started manufacturing the traditional Armenian carpets.

This manufacturing unit in Yerevan was started with an objective to produce the world-famous Armenian styled carpets and rugs. Due to the geographical reason, weaving rugs was like a part of the routine for Armenian housewives and mainly they used to decorate floor and furniture with them.

Now, due to industrialization, Armenian carpets are being sold all over the world, and mainly use for floor and home decorations and altars.

Whenever we talk about carpets, we think about Turkish carpets. Surprisingly, if you go through history, you will find that many Armenians were involved in weaving the Turkish carpets during the Ottoman Empire.

This manufacturing unit follows the traditional Armenian style of rug making. Armenia is one of the oldest countries in the world, so, Armenian carpets also have a rich history.

Now, let’s talk about the uniqueness of Armenian rugs

These carpets completely made by hands and even the colors also given by using natural items. The rug is a kind of bigger size carpet with knots and in Armenia, they wove the rugs with double knots, which makes it durable. Since no compromise is made with quality, weaving a rug will take months or a year, even if two or three expertise weavers are involved.

Making a double knot won’t be an easy task, but the speed with which the workers are doing it is unbelievable. Yes! experience matters.

A design will be given to the weavers and by looking at that, employees have to weave the same design in the wool using the manual loom. Two employees are assigned to weaving a single rug.

Most of the designs replicate the rich history of Armenia and their beliefs and religious symbols. Armenia is considered as the first country which accepted the Christian religion. Once, the rug is made, it goes through the finishing processes. A rug is washed for five or six times and after that brushing process starts. In this process, unwanted yarns have to remove and later trimming process is done, which makes the rug very smooth. To complete the entire finishing processes itself takes months.

A museum is set in Megerian company compound showing different varieties of rugs/or carpets and the photos of famous personalities who visited the company and to whom the Megerian carpets were gifted.Megerian family donated a huge size rug to Yerevan city for it’s 2800th anniversary which was in 2018.

There is a rug has displayed in the museum, which is around 160 years old with a very interesting story. During the Armenian genocide, a mother divided this rug into two pieces and given to her daughters, and wished that they will be safe. Unbelievably, these sisters reunited in the US after 50 years and later on they gifted the rug to Megerians.

Another 200 years old displayed rug contains designs of symbols of fertility. These kinds of rugs are normally gifted to the newly wedded couples.

The price of rugs may sound expensive, but when you think about the time and effort they put into making it, you will surely find it is worthy. Even a small hand kerchief size sample will cost around USD 30.

Armenia is a country with a rich history and so its beautiful carpets. Watching them working for hours to make those carpets beautiful is a huge inspiration.